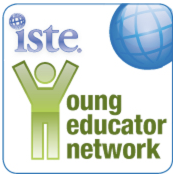 Probably the number one question I was asked during ISTE 2010 was how do we get more young educators involved in the ISTE organization.  As I look through flickr photos, blogs and tweets again tonight I see a lot of strong activity in the young educator network and truly feel that the group of young educators rocking the ISTE scene this year will bring added members in full force in 2011!

Just found this blog by Crystal Grandison on some of the best tweets of ISTE 2010.  If you scroll through that list, a ton of them are from the young educator community!  So, not only does ISTE have a good following of those of us under the age of 35, but we are involved and not to mention quite intelligent!  Amongst the young educator network we have award winning bloggers, conference/camp coordinators, internationally recognized emerging leaders and top-notch innovative educators.  I'm watching my twitter stream as I write this post and most of the comments still continuing from ISTE10 are from those under the age of 35. We are excited about what ISTE has to offer and will continue to spread the word!

This group of young educators on the scene right now includes some of the best people I've ever met and they continue to amaze me every single day.  I do think, however, that we are reached in a different way.  Our home base is twitter, no doubt about it.  We are making very strong connections online to the point that we are the best of friends by the time the ISTE conference rolls around each year.  Those connections quickly become one of the reasons we want to attend the conference.  This fact is evident in how much time we spend with each other when we get there including during sessions, meals, late night events and even trips and tours taken together during the conference.

All this being said, I was a bit surprised at how few people attended the bowling event for the Young Educators network this year.  After I thought about it, though, I realized it is because we are staying quite busy.  I peeked into a few schedules and, much like mine, they had several events planned and most all of them overlapped.  We're out there, we're just moving so much that sometimes you don't see us! I'll also add to that and say that lots of those that didn't make it bowling that night ended up at the lanes on another night because word spread quickly how much fun it was!

So, the answer to the question of how do we get more young educators involved?  I say keep it up kiddos!  Bring your friends and keep making those connections!  I think those of us in the under 35 category truly understand that a large part of attending the conference is about meeting new people and building the community.  Give it time, this is NOT a quiet group for sure and I expect big things over the next year!

Here are a few people to follow in the young educator community if you want to get more involved:

Yeah, I know I forgot some people.  I got most of these from my twitter stream as I was typing this blog. Go ahead! Share your recommendations in a comment!  I'd also love to hear from you if you have ideas on keeping the Young Educator's Network fresh and exciting!  Thanks in advance!!
Posted by Julie LaChance at 10:22 PM

Julie LaChance
Designer/Trainer at RMS Solutions and Educational Technology Specialist. I'm looking forward to getting to know you! Send me an email and say hello!

My Presentation is Google Sites: For Classrooms, Schools and Districts